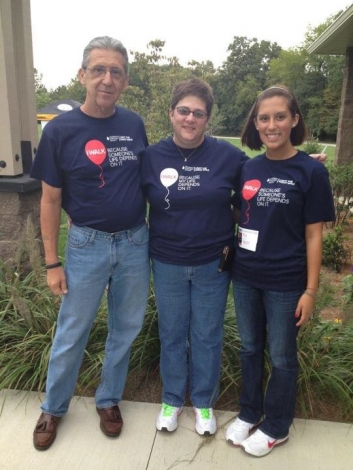 My story begins on Christmas Eve 2008.  My daughter was a 8th grader and was singing her first solo during Christmas Eve mass.  I was sick!  I barely remember that evening because I was so sick.  I spent the next several months at doctors' offices, trying different medications and having many tests.  Finally they decided to go ahead and do surgery (late June 2009) to try and remove lumps on the right side of my neck.  Surgery went well and I hoped that was it (even though I was very disappointed because I had asked the doctor for a lightening bolt scar and did not get it).

On July 2, my daughter called me from the hospital (as she is a volunteer there) and said the doctor wanted to see me.  I went right over and he told me what no one should ever have to hear, "you have cancer."  I joked with him, saying this was a heck of a way to be a skinny blond, as I am a fluffy brunette (I thought I would lose weight and wear a blond wig!).  I left the room and smiled as I passed my daughter as I did not want her to know what was going on yet.  I headed straight for my husband's office.  He wasn't there so I went into his boss' office and broke down, saying I need my husband.  I remember he nearly hurdled the desk to go track him down.

We faced this new challenge like we face everything in our lives, straight on, full force.  My entire family was ready to help beat this.  I have non-Hodgkin lymphoma and therefore so does my family!  I have had chemotherapy, been through two surgeries and am currently in the watch and wait stage.

Shortly after my diagnosis, while doing some research online, I found The Leukemia & Lymphoma Society (LLS) website and learned about the Light The Night walk.  I immediately signed up for a team (as two neighbors were diagnosed with blood cancer within a week of me).  It was then I learned that the day I was in my husband's office, his company had just met with the Light The Night chairman to be a paper balloon partner with the walk.

Five years later, we're getting ready for our sixth walk and cancer is still a part of me.  I have lost some good friends, made some good friends, and hopefully someday I can be there to say "Someday is Today" and there will be a cure.  Our team has raised over $25,000 to date and we are praying and hoping that no one will ever have to hear those words ("you have cancer") again.  Some days there are struggles, some days joy, some days pain and sorrow, LLS has made a huge difference in my somedays and in a lot of others' somedays also.