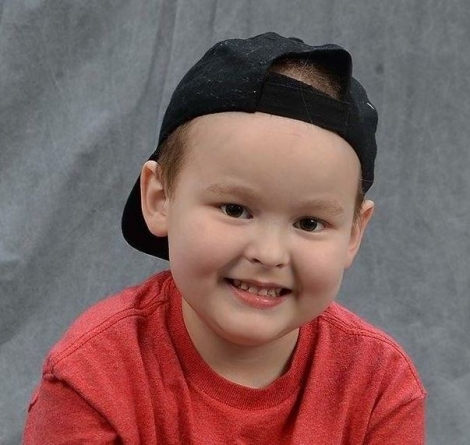 Aaron was taken to urgent care after he developed a rash that didn't seem right. The next day, he was admitted into The Children's Hospital, and 36 hours later he was diagnosed with acute lymphoblastic leukemia (ALL).

Over the next few weeks, he underwent two bone-marrow biopsies, 45 doses of chemotherapy, one surgery, seven lumbar punctures, plus numerous steroids, stomach medications and antibiotics. The 60-day consolidation phase turned into 120 days, as the treatment protocol was intensified. Every 30 days, he underwent a bone marrow biopsy. On a snowy day in January, Aaron's oncology team confirmed that he would need a bone marrow transplant to save his life.

After two weeks of testing and waiting, Aaron was admitted on March 10 for triple lumen central line placement, and chemo and radiation started the next day. His new life started on March 18, just two days after his sixth Birthday. He struggled through some pretty rough days and nights, but he finally got the okay to return home the first week of August. Aside from a few minor issues, Aaron is doing really well! I'm in awe of how courageous and brave he's had to be at such a young age.

We get through each day with hope. That hope comes from the doctors, nurses and staff at The Children's Hospital of the King's Daughters in Virginia and from the dollars being donated to research everyday, the same research that is saving my son's life. No parent wants to hear the doctors say "your child has cancer" but when we do, it is comforting to know that there's a treatment plan. That treatment plan was created due to research - and your donations are what is fueling that research! This mommy thanks you for saving my son's life!