Reflections from the #ASH19 Meeting 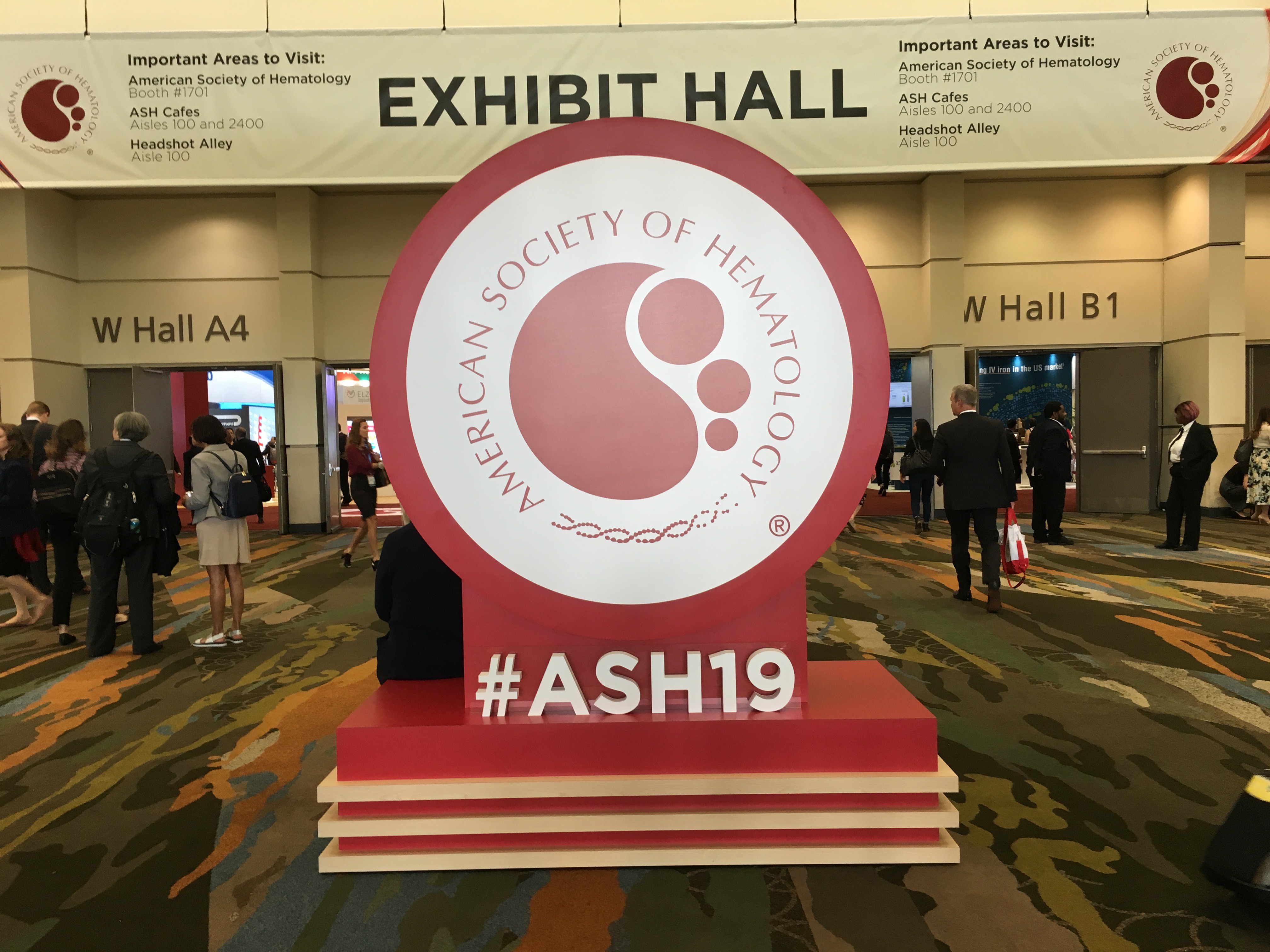 As the 61st Annual ASH (American Society of Hematology) Meeting and Exhibition winds down here in Orlando, here are some thoughts on where things stand in the world of blood cancers.

New targeted therapies approved in just the past two years alone are making precision medicine more of a reality for acute myeloid leukemia (AML). As I noted in a previous blog our own Amy Burd, Ph.D., LLS vice president of research strategy, presented compelling data that precision medicine, giving a patient a drug based on their molecular profile rather than one-size fits all, is bringing a paradigm change in how AML patients will be treated moving forward.

For patients with chronic lymphocytic leukemia (CLL), we’re seeing a decided shift toward chemo-free combinations of targeted medicines, opening a debate about whether the old standard, chemotherapy plus an antibody, will be replaced by a new regimen. Studies are showing that combinations of targeted therapies that work by blocking the activity of bad-acting genes, proteins or cellular pathways are quickly pushing their way to the front of the line for treatment of CLL. One study presented at the meeting showed that two targeted oral therapies given together, venetoclax and ibrutinib, resulted in deep remissions for CLL patients, with 75% having  high rates of undetectable minimal residual disease, meaning no traces of cancer cells could be found with highly sensitive tests. LLS didn’t fund this study, but has invested millions over two decades to advance both of these therapies.

Further, with the advent of CAR  T-cell immunotherapy and bispecific antibodies, both once the stuff of science fiction but now increasingly becoming mainstays of treatment with remarkable results, it’s clear we are experiencing a seismic shift in the standard of care for many patients with leukemia, lymphoma and myeloma.

Since coming on the scene, CAR-T has emerged as a miracle treatment that has brought patients from the brink of death to enduring remissions. But CAR-T doesn’t work for everyone and even many patients who initially respond, can relapse.

Enter mosunetuzumab. This new investigational drug is considered so game-changing for patients whose lymphoma has returned following treatment that it was featured during the plenary session, held in the biggest hall in the conference center to accommodate thousands of attendees. Mosunetuzumab is a bispecific antibody, meaning it binds two proteins, one on the surface of tumor cells (CD20) and the other on the surface of the recipient’s T cells (CD3). 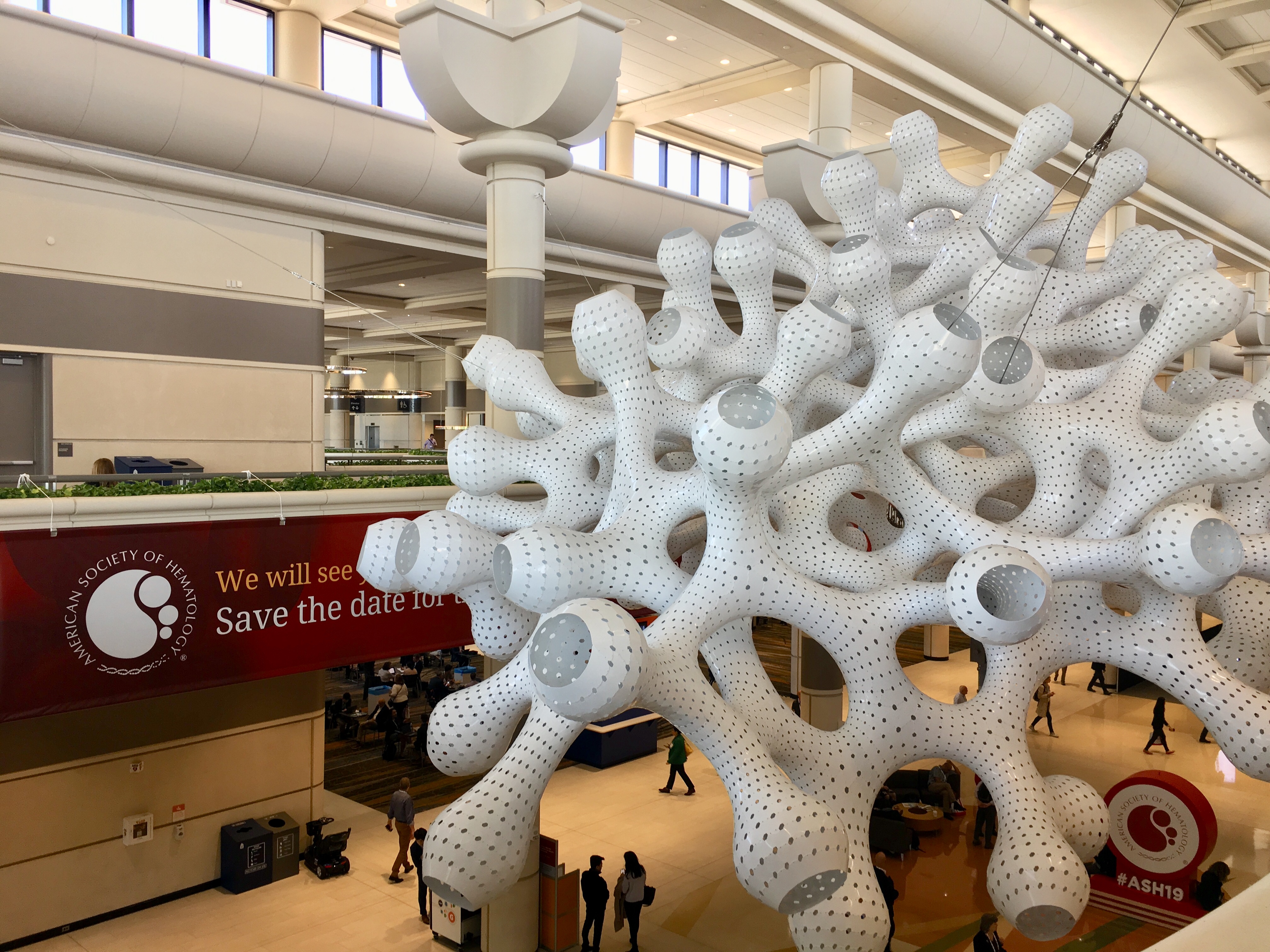 Other good news in CAR-T

In a previous blog I discussed promising results for patients with multiple myeloma treated with CAR-T.  But other blood cancer patients need options as well. While progress in immunotherapy has been impressive for patients with large B-cell non-Hodgkin lymphomas, questions remain about its effectiveness in mantle cell lymphoma. A study presented by researchers who treated their patients with a CAR-T developed by Kite, A Gilead Company, gives mantle cell lymphoma patients reason for hope.   This is critical because these are patients who didn’t respond to the best approved therapy for MCL, targeted drugs called BTK inhibitors.  LLS supported the development of Kite’s CAR-T, though did not support the mantle cell study presented at ASH

The study showed that 93 percent of patients in the study responded to treatment, and 67 percent had a complete response. Kite and Gilead plan to submit an application to the FDA within the next few weeks for this use in relapsed/refractory MCL, and if approved, would be the first cellular therapy for MCL.

New Options for Children with Leukemia

For decades children with acute lymphoblastic leukemia (ALL) and AML have been treated with chemo regimens that have remained virtually unchanged. But as with adults, we are learning that children also experience subtypes of disease based on genetic variations and other changes, and identifying their molecular profile before beginning treatment could result in more targeted treatment and better outcomes. That’s why LLS is developing it LLS PedAL trial, a global master clinical trial that would test multiple drugs for children with relapsed acute leukemia at up to 200 cancer centers in the U.S. and worldwide. The trial, modeled on the Beat AML concept of using genomic and other molecular testing to stratify patients, is being planned with hopes to begin enrolling patients by this summer.

A large study by The Children’s Cooperative Group and St Jude Children’s Research Hospital presented at the ASH meeting also used genomic testing to categorize 2,789 children by their subtype of ALL. The children had both B-cell and T-cell ALL, and the genomics testing identified other genetic and molecular mutations so children in the future can be directed to the right combinations of treatments.

LLS didn’t fund this study, but several of its authors are LLS-funded researchers working on pediatric cancer projects, including Charles Mullighan, MD of St. Jude and Mignon Loh, MD, of University of California San Francisco.

In a late-breaking abstract, a drug called blinatumab, a so-called antibody drug conjugate (the antibody is joined with a toxic agent that kills the cancer cells), showed good outcomes for children whose ALL had returned after treatment. While most children with ALL achieve complete remission from their first round of standard chemotherapy, those who relapse face a very poor prognosis. Patrick Brown, an LLS-funded researcher whose LLS project is investigating blinatumumab in relapsed pediatric ALL, presented the study this morning. Blinatumumab treatment was less toxic, fewer traces of minimal cancer cells remained, and children were more likely to proceed to a stem cell transplant, giving them their best chance for an enduring remission, he said.  Dr. Loh, is also a co-author on this study. LLS did not fund this study, but as noted, we are supporting Dr. Brown’s work on this same concept.

As mentioned in a previous blog LLS hosted a panel of biotechnology partners from our Therapy Acceleration Program on Friday here in Orlando. One of the partners, Forty Seven, presented updated clinical data Monday from the Phase 1b study supported by LLS evaluating its drug magrolimab in combination with azacitidine for the treatment of myelodysplastic syndromes (MDS) and AML. The data showed the combo is highly active and well-tolerated in both patient groups. At the cut-off date, 46 patients were evaluable, including 24 patients with untreated higher-risk MDS and 22 patients with untreated AML who are ineligible for induction chemotherapy. In the higher-risk MDS group, 92%, responded with 12 patients achieving a complete response, eight achieving a marrow complete response and two patients achieving stable disease, meaning the cancer didn’t get worse. In the untreated AML group, 64 percent responded, with nine patients achieving complete response.

The drug stops a specific protein - CD47 – from sending out a “don’t eat me” signal. By doing this, the drug unleashes immune cells called macrophages to gobble up the cancer cells.

Fostering the Next Generation of Blood Cancer Scientists

Finally, ensuring that we continue to retain the best and brightest minds researching the next potential cures for blood cancers, LLS designed its Career Development Program to support scientists who are at critical junctures early in their careers. Since the launch of our Career Development Program in 1953 many recipients of the award have gone on to become leaders in the field. One researcher, Stephan Grupp, MD, who was an instrumental member of the University of Pennsylvania team, along with Carl June, in developing the first FDA-approved CAR-T, credits his success to the boost his early career received from an LLS scholar award.

On Sunday we honored three grantees with CDP Achievement Awards, at a reception here in Orlando.

Peter Van Galen, Ph.D., assistant professor in the Division of Hematology at Brigham and Women’s Hospital and the Department of Medicine at Harvard Medical School.  Dr. Van Galen’s CDP has enabled him to establish an independent lab where he is studying the mechanisms that that make AML cells so difficult to eradicate completely. On Sunday he was awarded the Scholar in Clinical Research Award for an additional $50,000.

Ulrich Steidl, M.D., Ph.D., professor of Department of Cell Biology and Medicine at Albert Einstein College of Medicine – Montefiore Medical Center. With his CDP he is developing and testing new drugs to help MDS and AML patients. He received a Scholar CDP Achievement Award for $10,000 Sunday.

Shannon Elf, Ph.D., assistant professor of the Ben May Department for Cancer Research at University of Chicago focuses on myeloproliferative neoplasms, studying how a particular mutation in the calreticulin gene contributes to development of this disease. She received a $10,000 Special Fellow CDP Achievement Award Sunday. 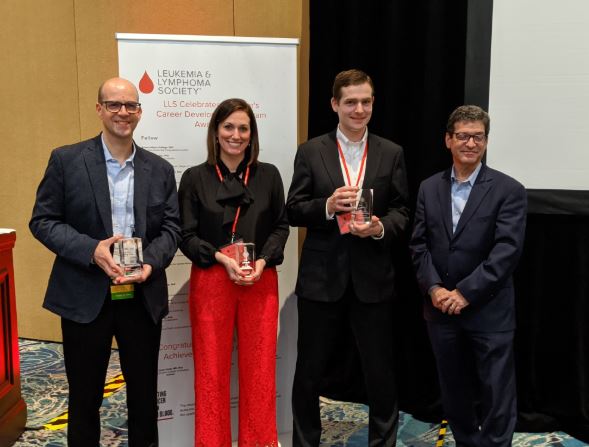