LLS-funded researcher Anthony Letai, MD, PhD, talks about how his work led to clinical trials of venetoclax for acute myeloid leukemia (AML) and a priority review by the FDA, and how these developments could ultimately lead to the first new therapy approval for AML in decades. 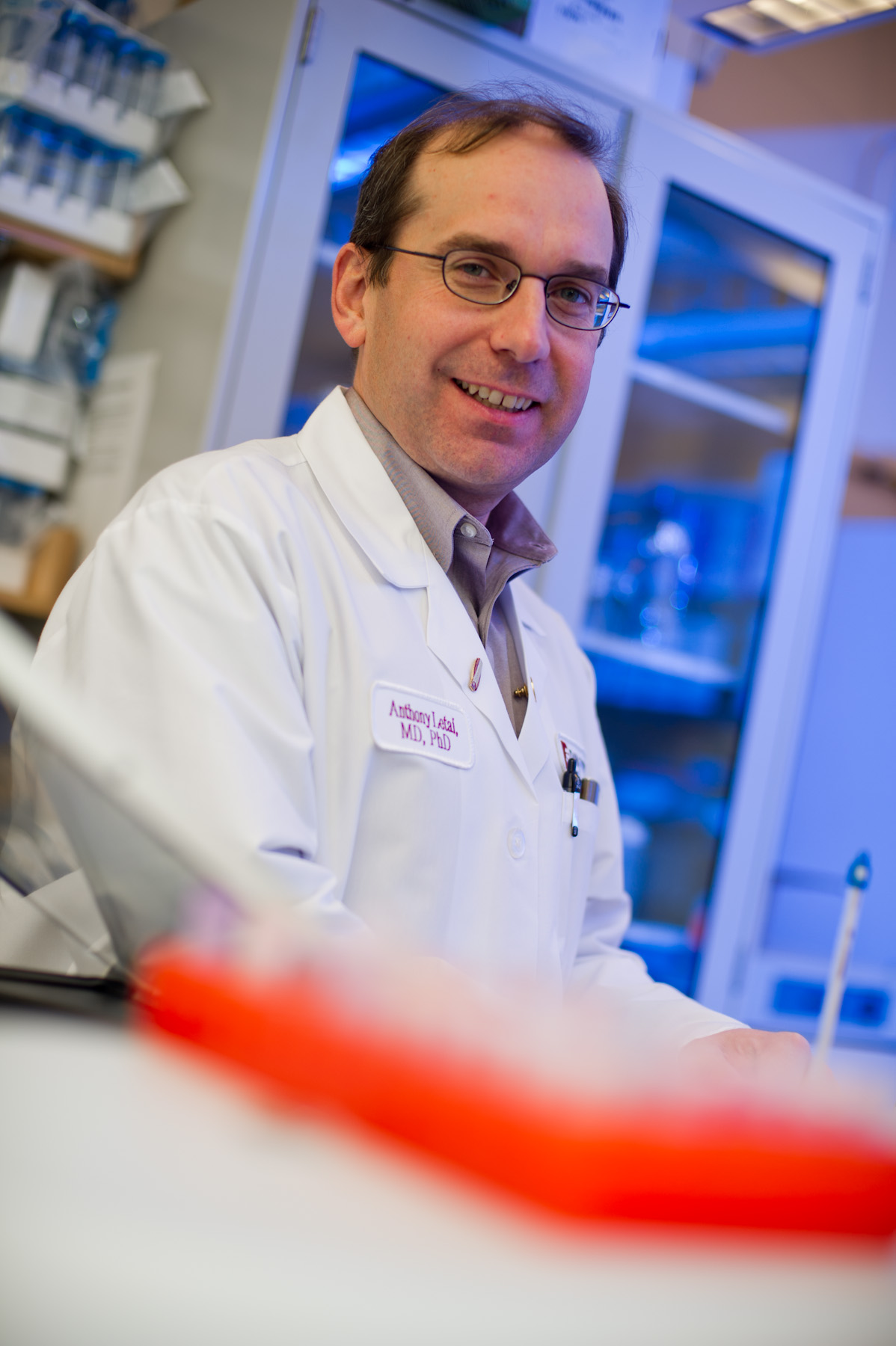 An associate professor in medicine at the Dana-Farber Cancer Institute, Letai has been the recipient of several LLS grants in recent years – supported as a Fellow and Scholar, and most recently, receiving Translational Research Program funding.

We’ve seen some exciting new clinical advances in chronic lymphocytic leukemia (CLL), in particular the spectacular activity of venetoclax, formerly known as ABT-199. The FDA approved the investigational medicine earlier this month for treatment of previously treated CLL patients who are at higher risk, and in January, the FDA granted a second Breakthrough Therapy Designation in combination with rituximab for the same population.

Venetoclax will likely be a key component of CLL therapy moving forward, and your work has played a significant role over the past 10 years.

What has been your motivation and involvement in these developments?

Letai: I am an oncologist as well as a lab researcher, so my greatest motivation has been to figure out a way to do better for our cancer patients.  It is interesting to probe the secrets of cancer biology, but the real gratification comes in actually improving the care of living, breathing cancer patients.  The concept of learning things in the lab to apply them to clinical care seems straightforward, but experience has taught me how challenging it can be.  The support of foundations like LLS that are interested not only in scientific hypothesis testing, but also in real clinical progress, is essential for this kind of translation to the clinic.

I started this work as a post-doctoral fellow in the laboratory of the late Stan Korsmeyer, one of the true giants in cancer biology, and a founder of the entire field of apoptosis, the field that studies the programs inside individual cells that makes them die.  Stan was one of the discoverers of BCL-2 and one of his interests was how to target BCL-2 to kill cancer cells in anticipation of the development of inhibitors of BCL-2, a protein that can act to keep cancer cells alive.  I worked to figure out what kind of cancers would likely be sensitive to this type of therapy. Around the same time, Abbott Laboratories (now AbbVie) was developing small molecules to inhibit BCL-2.  We helped guide them to the most promising leads with tools we had in the lab.  Once they settled on a very promising lead, we were the first to demonstrate the great sensitivity of patient CLL cells to this drug, ABT-737.

Later, in my own lab, with the help of Vickie Moore, a post-doctoral fellow, we showed that CLL cells were very consistently dependent on BCL-2 for survival, and that the secret of this dependence lay in proteins binding to each other on their mitochondria (little organelles inside our cells).  While better known as the “power plants,” mitochondria also are key decision makers in whether a cell lives or dies.  Vickie’s work made it clear that our tool to study mitochondria of cancer cells, called BH3 profiling, could play a really useful part in identifying the cancers that would be most sensitive to BCL-2 inhibitor drugs.  CLL was our first “victim.”

Subsequent clinical trials confirmed that ABT-199 (venetoclax, a descendent of the ABT-737 we originally studied) is fantastically active in CLL.  Matt Davids, who was a leading investigator in those early trials, was himself an LLS Special Fellow in Clinical Research.    There is no doubt that ABT-199 will be an important component of many of the exciting clinical trials in CLL that will be taking place over the next few years, in combination with other very exciting new agents.

Venetoclax now stands to become a story beyond CLL as targeting BCL-2 is also showing promise for AML.  The FDA has now granted Breakthrough Therapy Designation for combination treatment of patients with untreated AML not eligible for standard chemotherapy. The clinical results are very good and could possibly lead to the first new drug approval in AML in decades.

Why is this a novel strategy to treat cancer cells and why does it have so much potential?

Letai: It turns out that the most successful conventional therapies we have in the treatment of cancer, especially effective in leukemias, kill cancer cells by this programmed cell death pathway of apoptosis, the pathway that BCL-2 inhibits in order to keep cells alive.  However, these drugs do so indirectly, by causing damage to DNA and proteins that in turn trigger apoptosis.  How much better it would be to trigger apoptosis without causing that damage, which also occurs in normal cells!! That is what makes drugs like ABT-199 (venetoclax) so special.  They directly cause cancer cell death without damaging DNA and proteins in the normal cells.  That fact makes these drugs both potent and tolerable, and also relatively easy to combine with other active agents.  This whole strategy takes advantage of a dirty little secret of most leukemias – they are actually very ready to undergo apoptosis, and just need the right push in the right direction to die.

How might venetoclax change the treatment paradigm for AML?

Letai: I can foresee a day when venetoclax, or drugs like it, is incorporated in regimens for nearly every stage of AML – up front, relapsed, pre-transplant, even maintenance.  There is a vulnerability of AML cells in that they seem to need BCL-2 more than normal cells do to stay alive.  My lab identified this vulnerability, and so, by different methods, did the lab of Marina Konopleva from MD Anderson (who was herself an LLS Scholar in Clinical Research at the time!).  We combined resources and took our evidence to AbbVie to convince them to start a clinical trial of ABT-199 as a single agent in AML.  The clinical results were very exciting, that a single pill could induce complete remissions in some patients, even when their leukemia had been completely refractory to very toxic regimens.

How do you see venetoclax fitting into a larger role in cancer?

Letai: The efficacy of venetoclax as a single agent in AML was a clear demonstration of its biological activity in this disease.  Yet it was clear that responses that were more frequent and more durable would be even better.  So it is now being tested in clinical trials in AML in combination with other agents with demonstrated activity.  Preliminary results of one of these trials, the combination with vidaza or decitabine, were made public at the American Society for Hematology Meeting last December, and they are terrific!  Over 70 percent of the patients saw remission of their leukemia, a proportion probably at least as good as would be expected from toxic conventional regimens.  It remains to be seen how durable those responses are. However, these results suggest that there can be great clinical synergy from the combination of venetoclax with other known active agents.

I think this principle will likely extend to other blood cancers.  Indeed, it is currently being tested in clinical trials in multiple myeloma and non-Hodgkin lymphoma.  Dr. Konopleva, Dr. Dan Deangelo (also from Dana-Farber) and I are starting a clinical trial to test ABT-199 in combination with standard therapy in ALL (acute lymphoblastic leukemia) in a trial that is supported financially by LLS.  Indeed, I expect that the lessons learned in blood cancers will eventually prompt testing of drugs like venetoclax in combination regimens of solid tumors, too.

Do you see a role for venetoclax to be used with the newly developed immunotherapies coming to maturity?

Letai: That question really hinges on how immune cells like T-cells actually kill cancer cells once they are stimulated to recognize them by immunotherapies.   It appears that our old friend, apoptosis, is a very likely mediator even of these immune-related tumor cell deaths.  If that is so, since we can prime the apoptosis pathway of tumor cells with drugs like venetoclax, it is at least plausible that doing so might make tumor cells more sensitive to immunotherapies.