#ASH16 (Blog 2): Innovations in AML and Surprising Results for CML 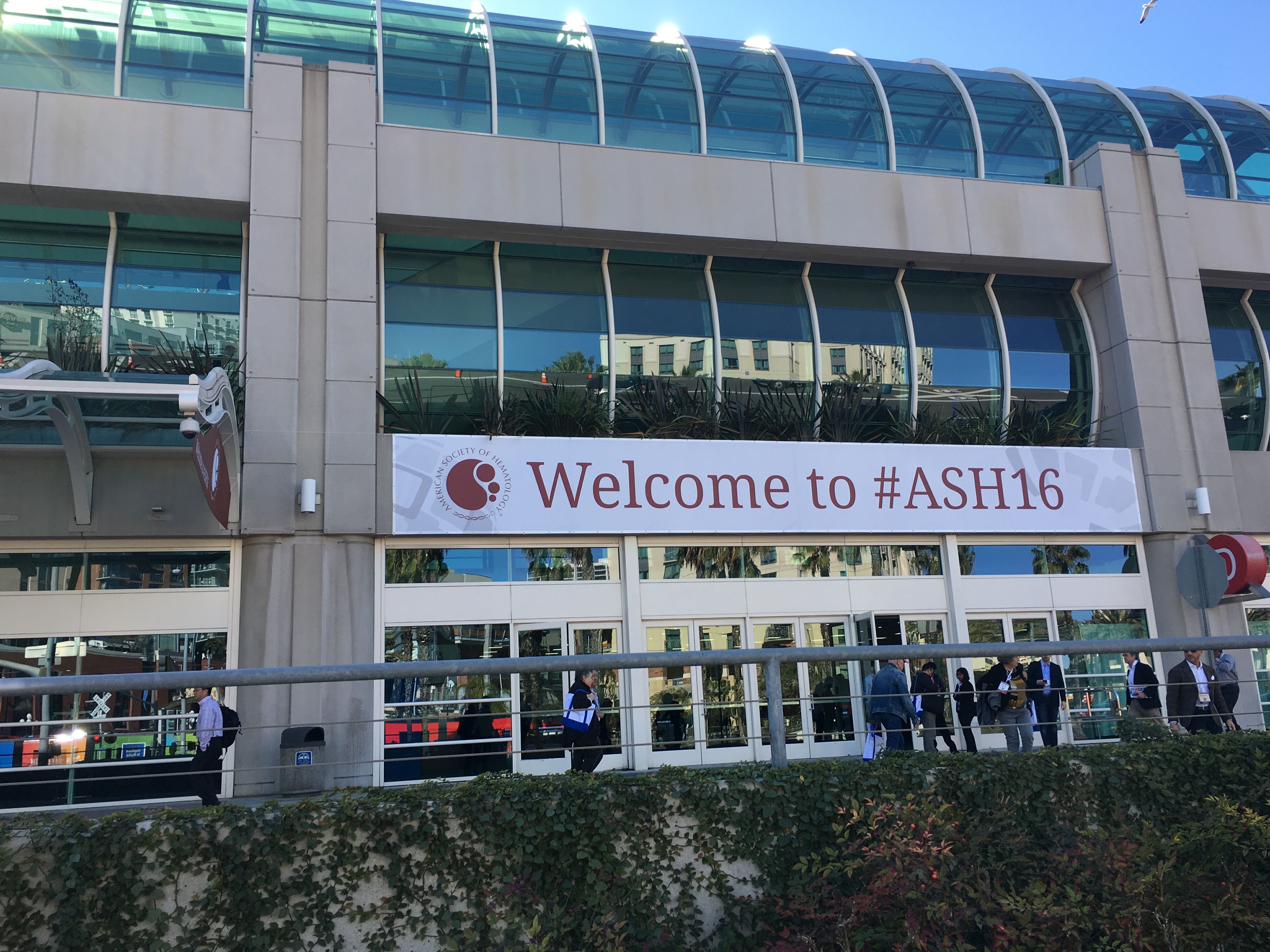 This is the second of a series of blogs covering the 58th ASH Annual Meeting and Exposition in San Diego (#ASH16) conference over the next few days. Check back for more news from the meeting.

On the first official day of the 58th ASH Annual Meeting and Exposition here in San Diego, scientists from around the world introduced new data from clinical trials for blood cancer therapies. Numerous results offer hope of transforming the way patients are treated and many presentations included LLS-funded research.

LLS is leading the offensive against acute myeloid leukemia (AML), one of the most deadly blood cancers. The linchpin of our initiative, the groundbreaking Beat AML Master Trial, will be in the spotlight tomorrow. But today we saw results from several other LLS-supported projects showing promise for improving outcomes for AML patients as well as reports from other studies of great interest to blood cancer patients.

The investigational drug under development by LLS Therapy Acceleration Program ® partner Celator Pharmaceuticals (recently acquired by Jazz Pharmaceuticals) was featured in a press briefing this morning. The scientific presentation of this study will occur on Monday. LLS has supported the clinical trials for CPX-351 (Vyxeos ®) since 2009.

We’ve previously reported about the positive data from a Phase III study of CPX-351 for older high-risk AML patients. In that trial, patients who were treated with CPX-351 had a survival rate double that of patients receiving the standard therapy.

The drug is an innovative reformulation of the standard AML chemotherapy drugs cytarabine and daunorubicin (often called 7+3). It encapsulates those two drugs into a single delivery vehicle to deliver a more optimal ratio to the cancer cells. The standard 7+3 chemotherapy has been in use for decades but prognosis for most patients, particularly older adults, remains very poor. 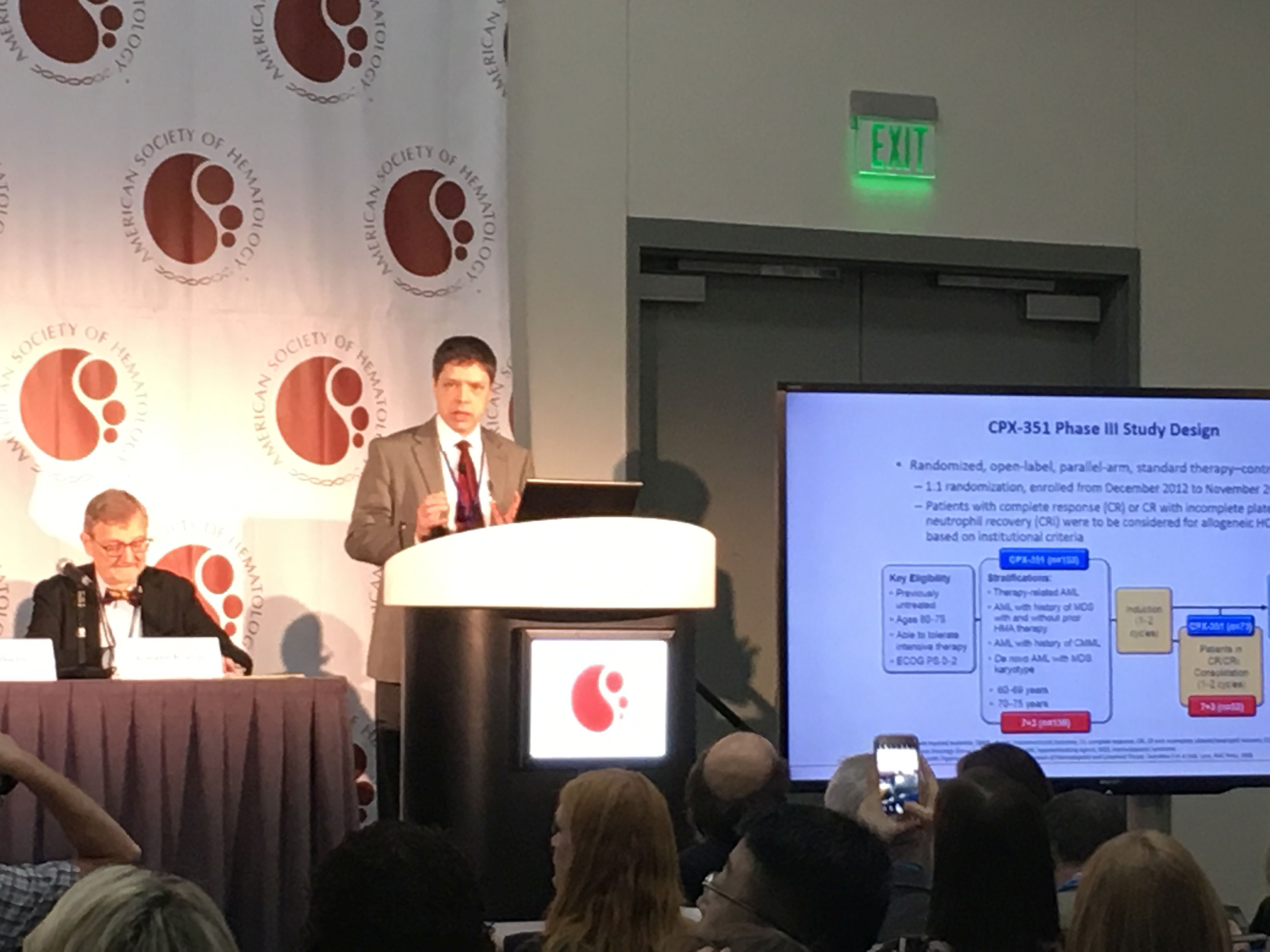 Today’s presentation focused on a subgroup of patients from that trial. In this analysis, patients who were first treated with CPX-351 before going on to allogeneic (cells from a donor) stem cell transplant survived longer than those who were just treated with standard 7+3 chemotherapy before a transplant.

The patients in the trial were older than 60 and had AML related to prior chemotherapy, AML arising from myelodysplastic syndromes (MDS), or AML MDS-related cytogenetic abnormalities. Of 309 total trial participants, 91 received a stem cell transplant. Fifty-two received CPX-351 and 39 received 7+3 chemotherapy. In the first 100 days after transplantation, there were 53 percent fewer deaths among patients receiving CPX-351 compared to those receiving 7+3 chemotherapy. 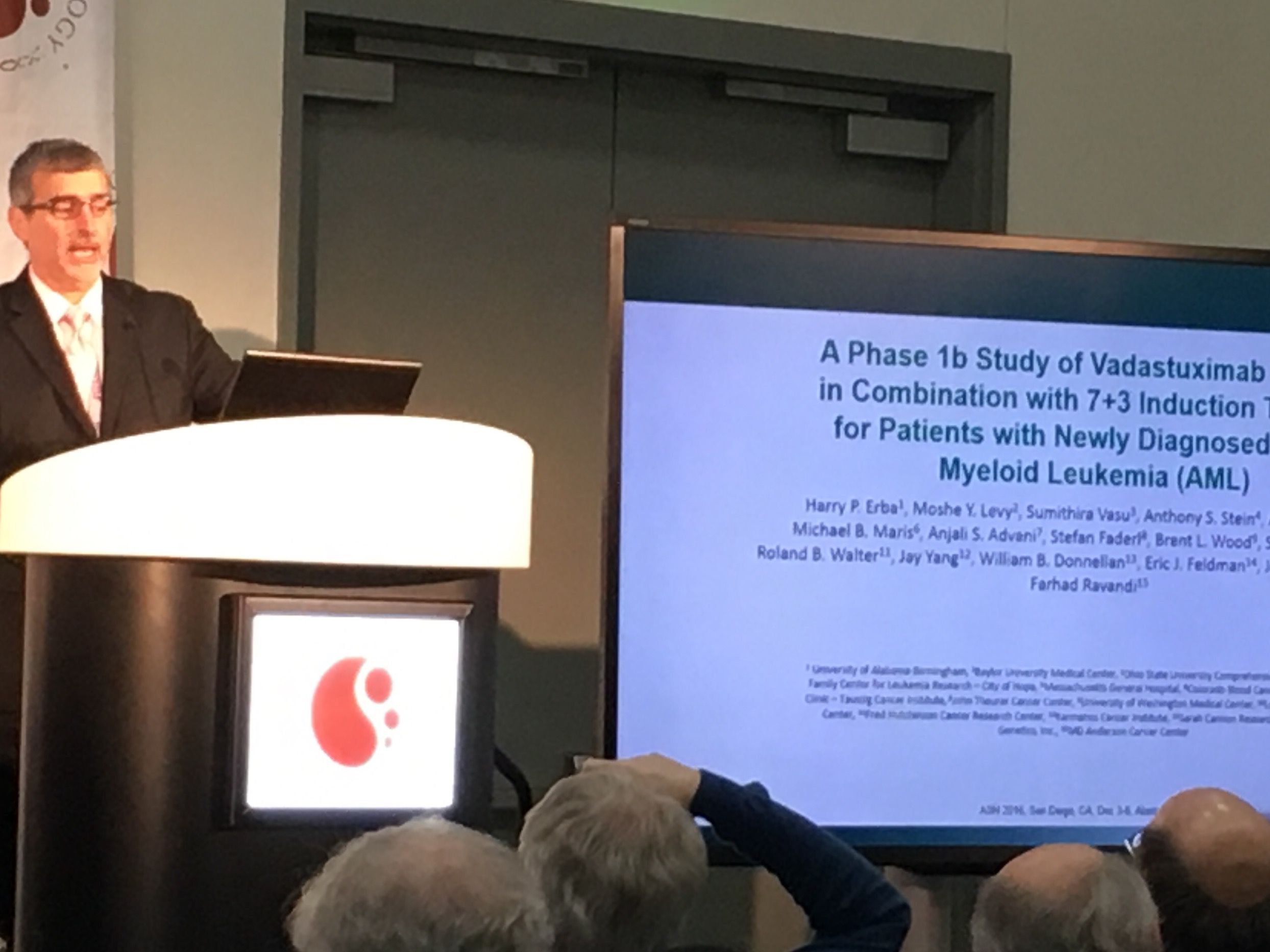 In another novel approach to treating AML, Harry P. Erba, M.D. Ph.D., of University of Alabama at Birmingham, presented findings for an investigational bispecific antibody therapy. The study was presented during a media briefing Saturday morning and in a scientific session later in the day. LLS-funded Fred Hutchinson Cancer Research Center investigator Roland Walter, M.D., Ph.D., (presenter at yesterday’s LLS symposium) contributed work to this study.

The study tested how patients responded to a combination of a novel drug, vadastuximab talirine (33A), with the standard 7+3 chemotherapy. The drug 33A is an antibody conjugated with a toxin (called pyrrolobenzodiazepine (PBD) dimer) and works by homing in on the protein (CD33) found on the cell surface of 90 percent of AML cases. The toxin kills the cancer cells.

The Phase 1 study found that this combination approach leads to remission and reduced relapse. “If we can change the induction therapy to get a deeper remission this may ultimately lead to improved outcomes for patients,” Dr. Erba said.

In the trial, 78 percent of patients achieved remission, with 60 percent achieving complete remission and 18 percent achieving remission with incomplete blood count recovery. In addition, highly sensitive tests showed many patients had no evidence of the disease 28 days after starting treatment, suggesting the drug may lead to a more complete remission than standard chemotherapy alone. The combination was found to be safe in this early phase trial. Dr. Erba acknowledged more research is necessary to determine if the approach leads to long-term disease-free survival, but the early results were encouraging. 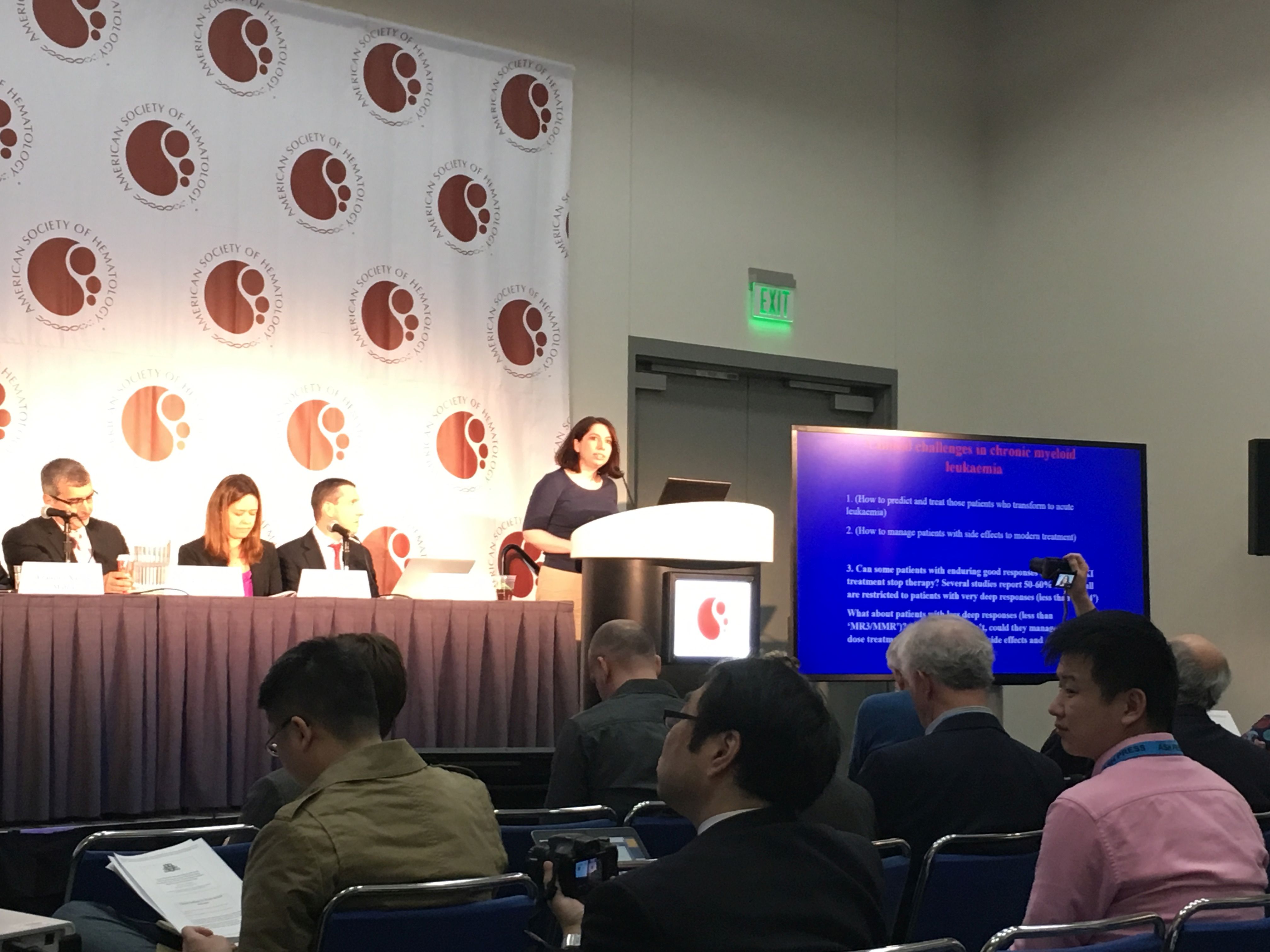 Two studies were presented today that should be of great interest to patients with chronic myeloid leukemia (CML). Tyrosine kinase inhibitors (TKI) are a class of drugs that have revolutionized treatment and outcomes for CML patients, offering many of them a normal life expectancy. The drugs target proteins implicated in many types of cancers.

TKIs first came on the scene in 2001 when the U.S. Food and Drug Administration (FDA) approved imatinib (Gleevec ®). LLS’s support of the pioneering work of Brian Druker, M.D., OHSU Knight Cancer Institute, helped lead to the development of imatinib.

These TKI drugs – imatinib (Gleevec ®), nilotinib (Tasigna ®), and dasatinib (Sprycel ®) – are so effective at controlling CML that some patients are now testing the safety of either reducing the TKI dose or discontinuing TKI treatment altogether.

Several studies are now showing that this is possible for some CML patients. In one French study, half of 821 CML patients showed no evidence of relapse two years after stopping treatment. Each additional year of TKI therapy increased a patient’s chances of successful TKI discontinuation by about 16 percent.

Of the patients who experienced leukemia recurrence, most regained their previous remission level after resuming TKI therapy and no study participants, within the study follow-up period, progressed to a dangerous state of advanced disease.

A study led by researchers at the University of Liverpool, United Kingdom, suggests many CML patients may be able to safely reduce TKI side effects by cutting their dose in half.

Of 174 study participants, the vast majority (93 percent) showed no evidence of leukemia rebound one year after cutting their TKI dose, and many reported a significant decrease in TKI-associated side effects within the first three months.

Just 12 participants showed signs of leukemia recurrence, all of whom regained remission within four months of resuming a full TKI dose. Participants who started with extremely low levels of leukemia were significantly less likely to experience a leukemia rebound.

These advances have promising implications for CML patients. 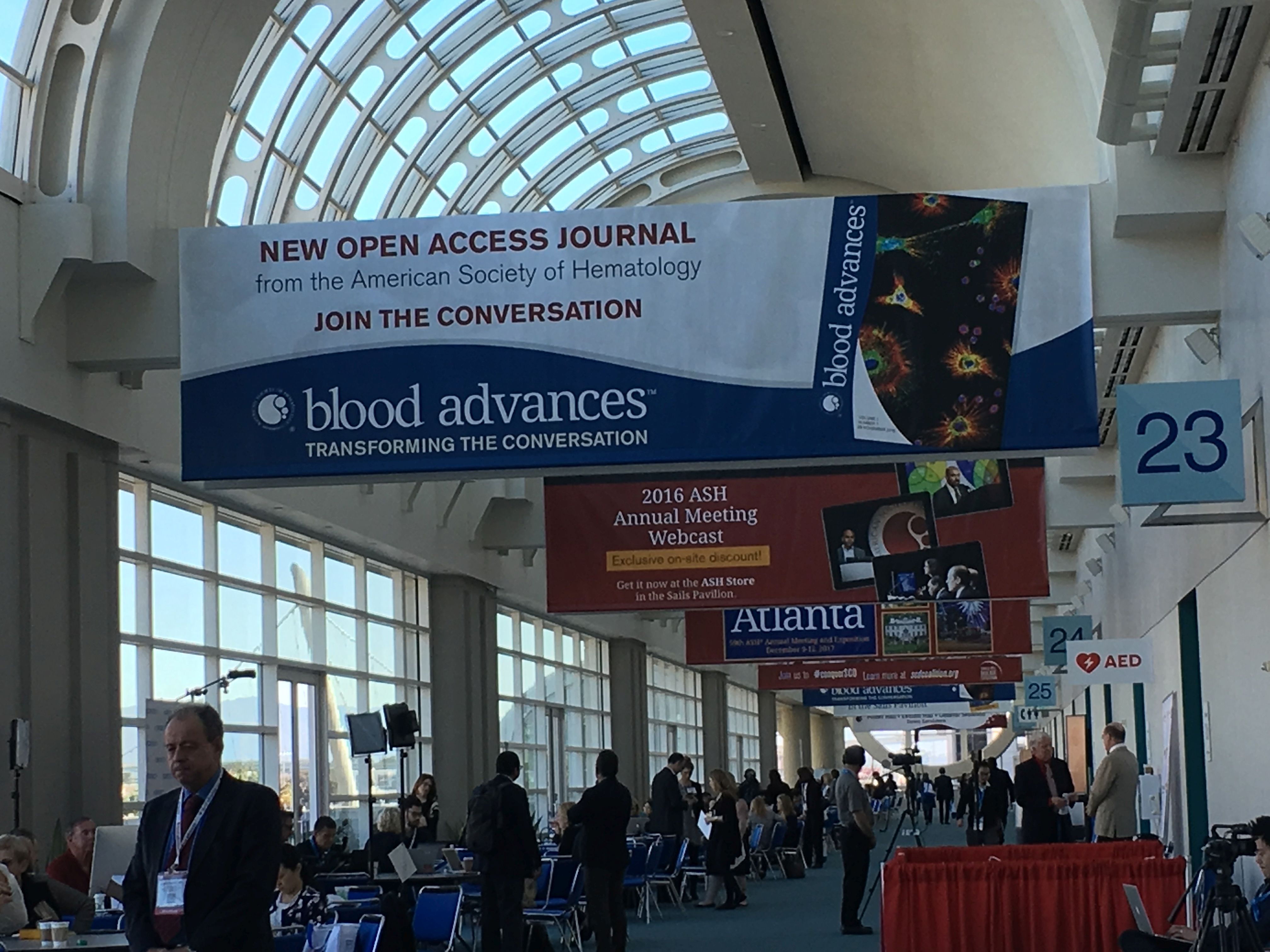