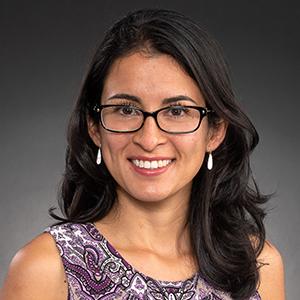 My studies are in primary myelofibrosis, a blood cancer characterized by a buildup of fibrous tissue that impairs the bone marrow’s ability to produce normal blood cells. I am studying alterations in large cells in the bone marrow called megakaryocytes and exploring how changes in the bone marrow microenvironment contribute to disease progression. By knowing more about this process, we can uncover new ways to treat the disease before it progresses to a more severe phase.

Primary myelofibrosis (PMF) is a type of blood cancer that is associated with scar tissue formation in the bone marrow that impairs the normal production of blood cells. PMF patients have a number of debilitating symptoms, an increased risk of clotting, and a propensity to develop acute myeloid leukemia. There are two FDA approved drug options, but they primarily alleviate symptoms and are generally effective for only 2-3 years. PMF occurs when cells in the bone marrow acquire specific types of mutations that lead to abnormal cellular growth and development. Among the affected cells are megakaryocytes, which normally participate in blood clotting. Mutations in these cells lead them to secrete factors that induce the abnormal formation of scar tissue in the bone marrow. Our lab has previously shown that compounds which normalize megakaryocytes are potential new treatments for PMF, highlighting the important role of this cell type in PMF. The World Health Organization recently classified the early stage of this disease as PrePMF. Most patients with Pre-PMF eventually progress to develop a more aggressive form of PMF (overt-PMF). Patients with Pre-PMF have fewer blood abnormalities, less scar tissue in the bone marrow and a better survival rate than patients with overt-PMF. As PrePMF is a newly recognized entity preceding overt-PMF, little is known about the mechanisms that promote the progression of the disease. I will study the alterations in megakaryocytes and changes in the area surround these cells in the bone marrow, called the microenvironment, that contribute to disease progression to a more aggressive disease. My preliminary results show that levels of some factors in the bone marrow microenvironment, including Ccl11, Il13 and Cxcl9 are increased early during the disease. However, their role on megakaryocyte function and disease progression are not known. I am using state of the art methods and will leverage multiple experimental systems, including patient samples, to better understand the early and late stages of PMF. I will determine the changes in megakaryocyte maturation during the different stages of PMF as well as how Ccl11, Il13 and Cxcl9 contribute to these PMF disease stages. These studies will aid my long-term goal of finding new therapeutic strategies to halt the progression of this disease.